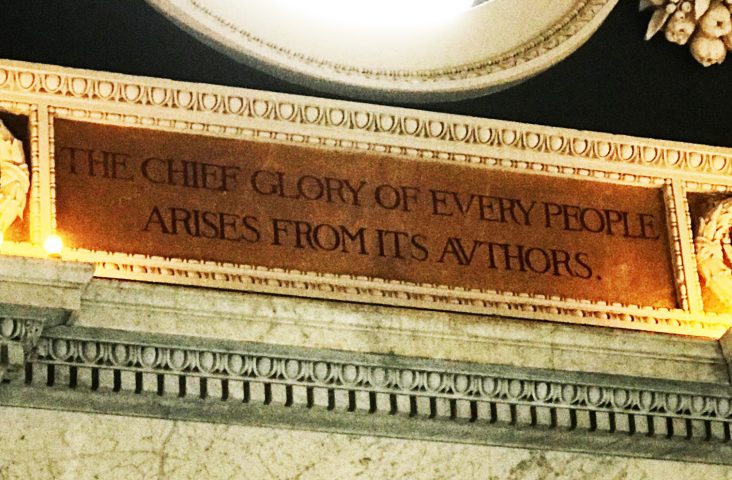 I believe in signs and omens…in great messages from beyond that point you the way you were meant to go. Maybe it’s my superstitious roots. Maybe it’s my need to believe in destiny. Who knows? The point is, I believe.

I thought that attending Apollycon this past March would be the sign I needed to regain my desire to write. While it helped, it wasn’t the push I was hoping for. It was walking through the Library of Congress that gave me that awestruck inspiration that I needed, a spark to relight the fire, if you will. The library is a monument to the writen word, adorned in art and quotations that reminded me just how important books are. Even the poorly written ones are a bound recording of a single human being’s thoughts and that, dear reader, is a precious thing.

I was awestruck. I was dumbfounded. I was filled with a sense of pride that I could call myself an author. I could count myself in those numbers. I am an author and in not writing, I am doing a disservice to the legacy those walls protect. I found more than inspiration, though.

On the first floor, in a far corner, contained behind a pane of non-reflective glass is the reason that all the words we write have traveled.

I fangirled. I cried. I touched the glass and lets its importance wash through me. It’s not because it’s a Bible, thought the importance of that fact didn’t escape me. It’s what the book represents. For the first time in the young history of the written word, it was made available to the masses, or at least to more than the few handwritten copies could reach. Information and ideas could be printed, bound and shared, blanketing across a population that had been lost in the dark, with only their cleric to help them find their way. There was nothing outside the dim cage of their lives. Then Gutenberg built his printing press. He printed one Bible. And another and another, changing the world of literature as it was known. But it was more than that. It changed the nature of human consciousness. The population once contained in the smallness of their own existences now had access to the outside world, to thoughts and concepts beyond their own. Gutenberg’s press was a way to bring people out of the darkness into the brilliance of philosophical thought, histories, fictional worlds and beyond. They saw a beacon of intellect and reason in pages that they’d never before touched. They found illumination. It started with a Bible and now whole works are shared in bookstores, libraries and online, allowing access to anyone. So many are searching in the dark, reaching out for something more than what’s right in front of them and words are a way through. We are the authors, the creators, the makers of worlds. We are the light. Don’t let it go out.